In honor of Rail Safety Month in September, BNSF partnered with California Operation Lifesaver (CAOL), Amtrak, Amtrak San Joaquins, San Joaquin Valley Railroad /Genesee & Wyoming, and Union Pacific Railroad to hosting an Officer on the Train event to raise awareness and educate the Fresno community about rail safety and coordinate enforcement on and near the railroad tracks.

Railroad personnel and local law enforcement were onboard the train to issue citations to motorists and pedestrians for ignoring crossing gates and trespassing on railroad tracks.

According to the Federal Railroad Administration, 94 percent of train-vehicle collisions can be attributed to driver behavior or poor judgment. This joint law enforcement exercise led by BNSF Police and joined by Fresno, Amtrak and Union Pacific police departments demonstrates to drivers and pedestrians the critical need to obey the laws near railroad tracks. 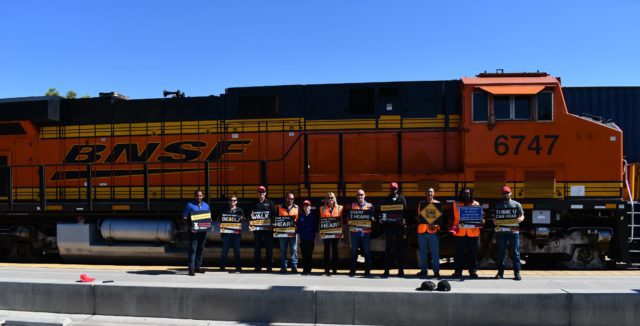